If you read some of the reviews for Hotel Negresco, you’d strongly consider staying elsewhere.

“Living on Past Reputation” says one recent review, “ Overrated. Pretentious and noisy” says another. So why would I recommend this hotel?

Could it be that Hotel Negresco is one of a kind? Or is it because those past glories include a world renowned art collection? Or is it the Michelin Starred restaurant, the impeccable service or just it’s location overlooking the Baie D’es Anglais?

I had known of the Negresco for many years before we actually stayed there. We used to stay in Cannes every summer but after too many years we thought of giving Nice a try instead. On our first visit, we stayed at the Hotel West End, almost next door to Hotel Negresco. The West End was a perfectly good hotel. The rooms were clean, the view was good but it wasn’t really a luxury hotel. There was no bar, scant breakfast and the room was too small to stretch out (the bathroom was so small that my knees hit the bar when I sat on the loo!). As I say, it was an OK hotel and I’d go back. But it wasn’t the Negresco.

On previous day trips to Nice, we’d pop into the lobby to see the artwork and fancy loos (more on that later) but no more than that. Whilst staying next door, we popped back in, took one look at the place and thought this has to be worth a try. We booked a long weekend in Early Spring and packed accordingly. It was on this first trip that I knew Negresco would become a firm favorite.

Why Do We Love Hotel Negresco So Much?

One of the reasons I love Hotel Negresco so much, and why I believe it is pretty unique in the world is that the hotel itself is a destination. It has a unique history, incredible decor and an art college to rival any major gallery.

So where to start… Well the building itself is beautiful. Built in the ‘Belle Epoque’ style which Google assures me is the time of calm between the first and second world war. The white exterior gives way to the beautiful salmon pink roof. Unlike the comparable Carlton Hotel in Cannes, this has only one turret which stands at the corner above the entrance. This ‘grand facade’ works to be the iconic beacon of the hotel – an iconic landmark you can see from far along the Palais des Anglais and one that serves as the backdrop for illumination. On Bastille Day the front is light up with the Tricolor flag, stirring passion and admiration in equal measure.

The history is the stuff of local legend. Created by Bucharest-born Henri Negresco (sometimes spelled Negrescou or Negrescu) founded the hotel with a vision of creating a hotel to entertain the wealthiest of Riviera visitors. Opened in 1912, it only had a few years of hotel service before converting to a hospital during World War 1. Negresco in his generosity offered to pay for 100 hospital beds. Sadly his generosity was not repaid as the hotel never recovered its clientele after the war and he dies a broken man.

Another World War meant the hotel didn’t really find its feet until it was acquired in 1957 by Jean-Baptiste Mesnage as the only place in Nice with a full sized lift to fit his incapacitated wife’s wheelchair. The hotel was then entrusted to their daughter Jeanne who has just married Paul Augier, lawyer and politician from Nice. Together they set to creating an opulent hotel, now stuffed with over 6,000 French works of art.

They padded the large red velvet elevator like the cradle of the King of Rome, scouring antique shops to furnish the salons, the 21 suites and the 96 rooms that sum up five centuries of French history. The front of house staff were dressed like 18th-century elite bourgeois households, complete with red-plumed postilion hats which are such a hotel trademark, even today.

Paul and Jean were truly a power couple. In the lobby, you can see a memorial case to the late Paul who died in 1995. Not only was he a globally respected hotelier, he was also awarded Commander of the Legion of Honor, Commander of the National Order of Merit, as was his wife Jeanne who was decorated on December 4, 2006, at Negresco. He also received the Resistance Medal during the Second World War, as well as several other decorations.

You still see Jean around the sometimes. You can’t miss her flame red hair and keen eye as she is wheeled around the hotel. Allegedly, when asked by Bill Gates, and others, how much she’d sell the hotel for, she would answer, ‘It is not for sale.” Instead, she created the Mesange-Augier-Negresco foundation and bequeathed the hotel, it’s art and antiquities plus her other properties to ensure the hotel remains forever independent. As she puts it, “not sacrificed on the altar of profit.” The foundation will also provide for animal and humane charities.

On each of the four guest floors there is a different theme, from African Art to historical French nobility. On every corridor hangs different artworks grouped into categories like birds or travel posters of the Negresco. Each room is entirely unique, done out in pastel colours with old furniture and period style bathrooms. If you stay in the Coco Chanel suite, you will have a gold bath, in the adjoining bedroom you will sleep on a 17th century four-poster bed. I can see why some Tripadvisor reviews didn’t warm to the rooms. Unlike the larger luxury hotel chains, nothing about this decor is standard. Except for comfort. Every room is clean and comfortable. It has wifi throughout and all the best rooms look straight out onto the bai des anges.

The Reception & Those Bathrooms!

Next to the hotel entrance stands a now iconic statue of Miles Davis. Made in technicolour mosaic, this wonderful artwork gives just a hint of what is inside. If you Google the statue you will find better images than mine. For some reason, whenever I try to take a picture the sun is in the wrong position! 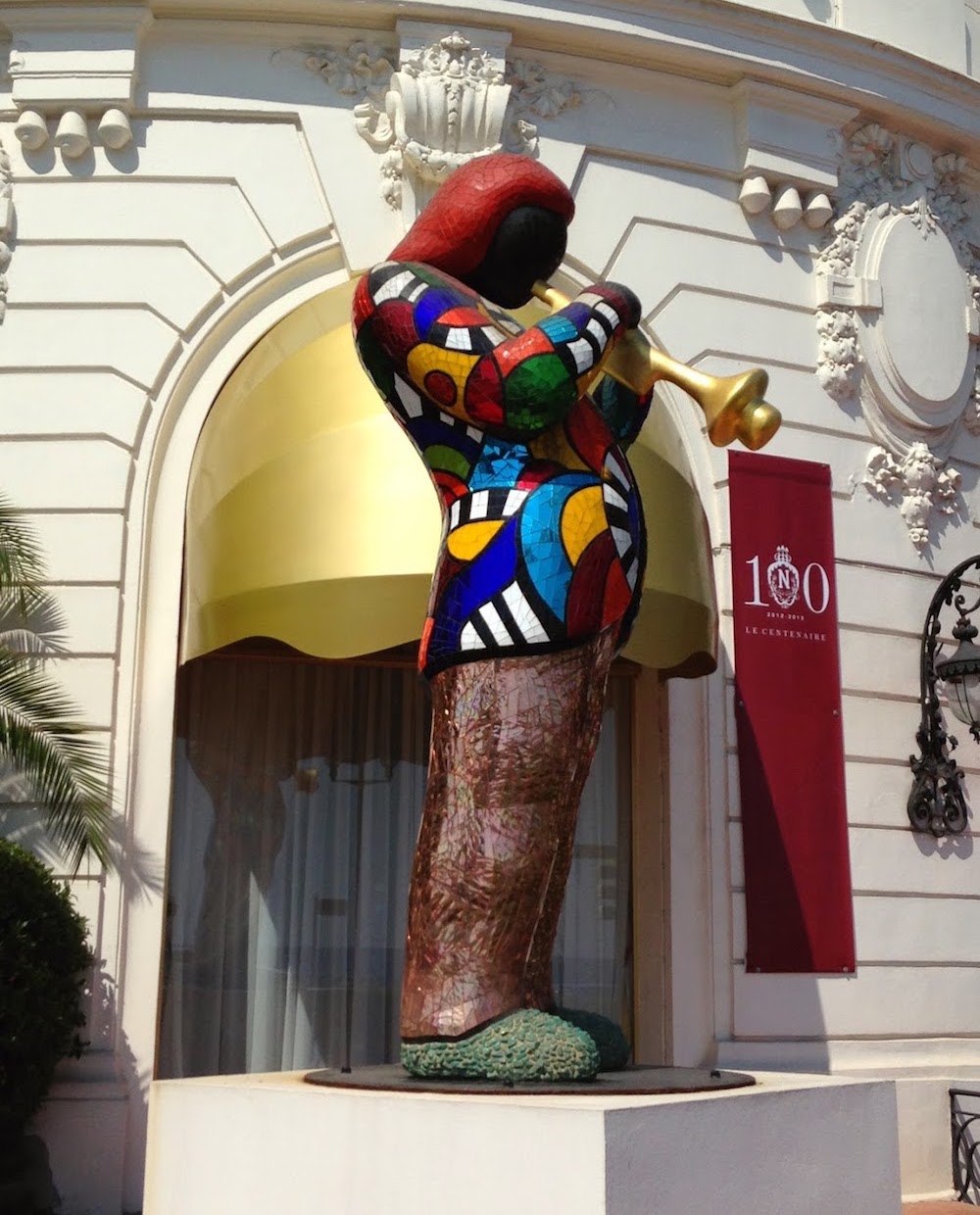 Most days the doorman will let you in to have a look at the reception and reception rooms downstairs. As you wander past the Renoir statue at the bottom of the stairs, you will come into this wonderful round space (which I am sure has a more formal name.) Usually, you will be opposite a revolving statue of a large yellow lady. This is the famous work from Niki de Saint Phalle. Venture into the bathrooms (or restrooms for my American friends) at the Hotel Negresco and you will see yet another set of unique art. The gents is decorated like a Hussars’s camp, complete with full-scale hussar looking at you. (TO be honest, a historian may correct me on the Hussar bit, but he’s an old-fashioned soldier anyway..) This is what we’d pop in to see on those early visits to Nice. As you may expect from this hotel, the dining options aren’t standard either. Breakfast is served in La Rotonde. The breakfast is a typical hotel fare – expensive continental options, but the decor is anything but. That is because La Rotonde is decked out with old painted carousel horses. Every so often, as you eat your breakfast, the carousel will start and the horses will gallop, up and down. It is certainly a great family experience and definitely an Instagram opportunity. You can also have a brasserie-style dinner here which we have yet to try.

The Michelin Starred Le Chontecler is proper posh. After a few G&T’s in the bar, we wandered through and sat down to a 6 or 7-course dinner. The entreé was a champagne cart with the option of at least 6 different champagnes to begin with. I can’t honestly remember the whole mean but I know dining options included Snails, Foie Gras, and other such delicacies. All presented beautifully on the plate, with a flourish of those domed lids you see in the movies.

Dining at Le Negresco isn’t for the faint-hearted, it can be fancy and expensive but fun. We sometimes have just one meal in the hotel not least because there is so much choice in the city that we have to try. (see where to dine in Nice)

Already Dreaming Of Our Next Return…

We love coming back to this hotel for all the reasons covered above. When you slip upstairs you are transported into another world where the hotel is a major part of the holiday. It is less than 25 minutes in a cab from Nice airport, which is in turn only two hours from England.

You may know by now that I love movies and I am building a list of movies that feature the French Riviera. The Negresco doesn’t get nearly as much screen time as the Cannes Carlton hotel but you will see it in some shots from ‘To Catch a Thief’, a fleeting glimpse in Prince’s ‘Under the Cherry Moon’ and Elton John dances in the hotel interior. You may also catch a glimpse of the hotel in the Riviera TV Series.

One thought on “What Is It Like To Stay At The Hotel Negresco In Nice?”